NOTE:  Formatting is not suited for a cell phone or tablet-sized screen; therefore, it is best viewed on a computer. 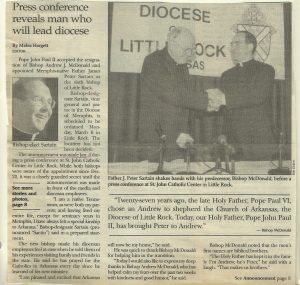 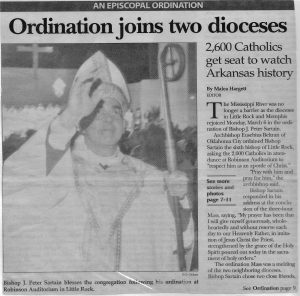 Fr. Tony celebrates his 80th Birthday:  The parish celebrated Fr. Tony Wilwerding’s 80th birthday with him in December of 2000.  A new processional crucifix for the parish was purchased by parishioners in his honor.  It is still used today (2019).

St. Michael Statue:  Around the year 2000, the St. Michael statue was added to the church grounds, greeting people as they turn into the parking lot.  It was donated by the Corso Family, long time members of St. Michael’s Parish, in memory of their deceased loved ones. 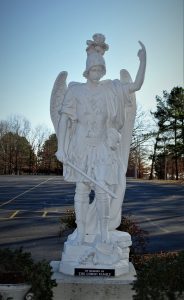 Open House:  In March of 2001, an Open House was held at St. Michael’s.  Each ministry set up a table in the Parish Hall and parishioners were invited to come to get information with the hopes they would become active in some ministry.  Of course, non-Catholics were also invited to come to see all that we do at St. Michael’s in hopes that they would be interested in joining our parish family.

In June of 2001, we bid farewell to Fr. Mancini and welcomed our new pastor, Fr. Kevin Atunzu.

Rev. Kevin Atunzu:  Fr. Kevin was an extern priest from Nigeria.  He had studied in France and California and had degrees in Spiritual Direction and Psychology.   He had a devotion to the Blessed Sacrament and began an hour of Eucharistic Adoration on the main altar before the weekend Masses.  He was a strong promoter of Eucharistic Adoration and Contemplative Prayer with parishioners; he also held classes while serving here on Centering Prayer.  Fr. Kevin loved to spend time in prayer and spiritual reading; he felt exercise, as well as sleeping and eating well, were just as important in one’s spiritual life.  With Fr. Tony spending most of his time in Mountain Home now, Fr. Kevin decided to split the time difference between Fr. Mancini’s 7:30am weekday Mass and Fr. Tony’s 9:00am weekday Mass, and offered one Mass at 8:15am Tue – Fri.  Fr. Kevin served in several parishes of the diocese after ours, and later, incardinated (joined) into our diocese.  He is currently retired and living back in Nigeria (2019). 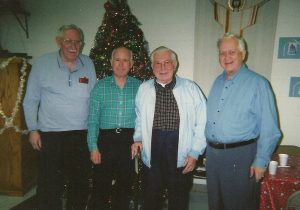 Altar Society Christmas Bazaar:  The annual Christmas Bazaar, begun at the old stone church in Hardy,  continued through 2007 after which they explored other means of fundraising, including Country Breakfasts, Rummage Sales, Bake Sales with Silent Auctions, Bingo Fundraisers, even Bakeless Bake Sales.  Membership in the Altar Society grew smaller and fundraisers became more difficult.  In 2017, the Finance Committee approved a 2nd collection three times a year to benefit the Altar Society. 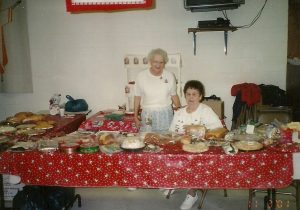 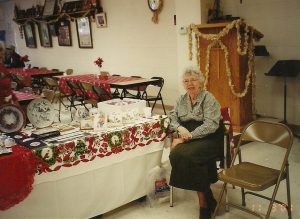 World Youth Day with Pope John Paul II:  In July of 2002, Bernie and Rose Brandenburg, Youth Group Directors, along with 16 of our youth and 2 other adult chaperones, traveled in a converted school bus (which they hand-painted) to Toronto Canada to see the Holy Father.

Confirmation:  In May, our Confirmation candidates traveled to LR to be Confirmed by Bishop Sartain at St. Andrews Cathedral.  Accompanying them was Dc. Mike Cumnock. 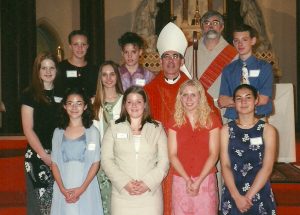 New Holy Family Cabinet:  In May of 2003, Bingo paid to have a new corner cabinet made for the Sanctuary to house our statues of St. Joseph with Baby Jesus and Mary.

Latin Mass Update:   Fr. William Define was assigned here in the summer of 2003.  It was decided at that time by the Fraternity, that the priests assigned in Cherokee Village and Little Rock needed to have some time in “community”.   So Fr. Define would spend Monday evening through Friday morning in Little Rock with the Fraternity priest assigned there, then travel to Cherokee Village to spend Friday evening through Monday morning.  He offered a Latin Mass here every Friday evening, and morning Mass on Saturday, Sunday and Monday.   Fr. Define was here the longest of all the Latin priests, 4 years.  Most seemed to serve for a year or less so there was no time to get to know them before they were reassigned.    Fr. Define was loved by all, both those who preferred the Latin Mass and those who preferred the Novus Ordo (English) Mass.  He once said, “When we die, God is not going to ask which Mass we attended, He’s going to ask us how much love we had in our hearts.”  Fr. Define was very helpful in attending to the spiritual needs of all the parishioners and many preferred to go to him for Confession.  During the week when he was in Little Rock, he visited the sick and helped out at parishes whenever there was a need.  (The Bishop even asked him to join the diocese at one point, that’s how much they loved him, too.)

Monsignor Rev. James Mancini:  During Mass on Nov. 4, 2003, at Christ the King Church in Little Rock, Bishop Peter Sartain presided over an investiture ceremony to confer the title of “Chaplain to His Holiness John Paul II” on 6 priests of the Diocese of Little Rock, giving them the honorary title of Monsignors.  Our former pastor, Fr. Mancini was among them.  Below, in the newspaper picture, they are seen holding their papal documents.  Msgr. Mancini is the second from the right.   Click here for a clearer picture and to read the caption below. 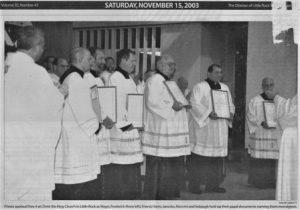 5 Year Anniversary of Perpetual Eucharistic Adoration – Fr. Venantius Preske, our former pastor, was retired and living in a private home in Horseshoe Bend.  (He helped fill in at various parishes when their pastors were away.)  When our 5th year anniversary of PEA was approaching, Fr. Preske offered to help us plan it and be with us to celebrate the occasion.  It was well attended. 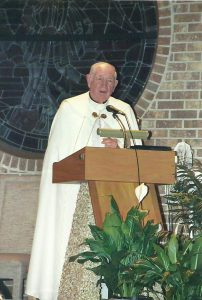 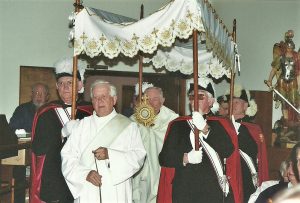 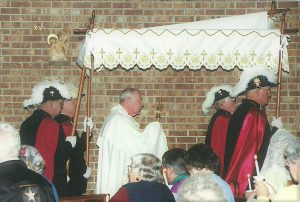 New Piano:  The parish purchased a Roland electric piano in 2005 with the hopes that those who can play the piano would step forward and volunteer to be part of the Music Ministry serving at Mass. 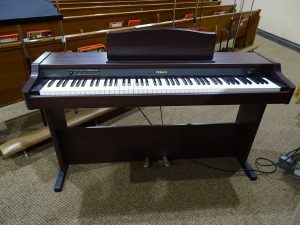 Goodbye Dc. Tony and Dolores:  In 2005 we bid farewell to Dc. Tony and Dolores Ludolph and their adopted daughter, Michelle.  Dc. Tony, who often gave us the weekday homily, and Dolores, were always filled with the Joy of the Lord.  They also had a deep devotion to Our Lady of Schoenstat, which they brought to our parish.  The Ludolphs moved back to the San Antonio, TX, area where they were formerly from. 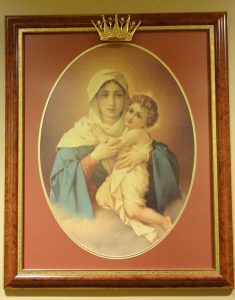 Confirmation:  In November of 2005, Bishop Sartain visited St. Michael’s for the celebration of Confirmation. 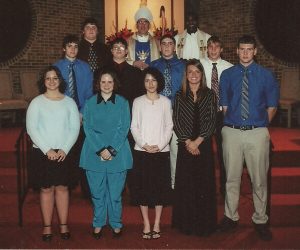 Seder Meal:  In April, Jewish converts, Marty Barrack and Ariela LeGendre, with Fr. Kevin’s encouragement, organized a Seder Meal for our parishioners.  It was an educational experience for all who attended. 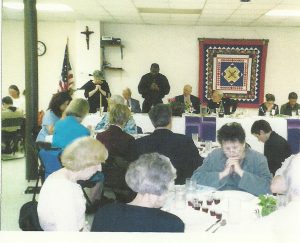 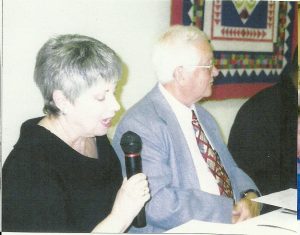 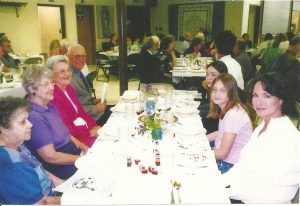 Parish Vocation – Rev. John O’Brien:  “Johnny” O’Brien, son of John and Renee O’Brien of Hardy, moved here from the St. Louis area with his family in the mid-’90s.   It was obvious that Johnny was a special young man with a deep devotion to God and destined to become a priest.  Fr. John was ordained as a priest for the Diocese of St. Louis in May of 2007.  He spent 2 more years in Rome studying after his ordination. 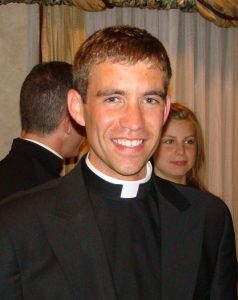 In June we bid farewell to Fr. Kevin and welcomed our new pastor, Fr. Tom Marks.

Rev. Thomas Marks:  One smiles when they think of Fr. Tom.  The secretaries’ first encounter with him was in a flannel shirt and baseball cap and he introduced himself as the gardener.  That was Fr Tom, full of jokes.  When Fr. Tom came, he changed our weekday Mass to 9am; he also moved CCD from Sunday to Wednesday and Wednesday Mass to 6pm in hopes that some of the families would come to Mass.  Fr. Tom loved to socialize and be invited for dinner.  In fact, if you called to make an appointment with him, he’d insist on meeting at a restaurant.  Fr. Tom’s gift was ministering to the sick.  At funerals, he won the hearts of Protestants and fallen-away Catholics with his charity and comforting words.  He was very friendly when out in the community and several fallen-aways returned to Church because of him.  Fr. Tom had an eye for beauty and made some wonderful changes to the sanctuary.  His vision to return the Tabernacle to the center and enlarge the altar area didn’t come to fruition until after he was transferred.  He was dearly loved by many.    Fr. Tom has retired from full-time ministry and is living in Little Rock.

Latin Mass Update:  In August of 2007, Fr. Laurent Demets was assigned to Cherokee Village to replace Fr. Define.  The Mass schedule remained the same.  There was a desire at that time to begin saving for their own Latin Rite church (but that vision remained unfulfilled).

St. Michael’s Christmas Parties:  The Parish Christmas Party was held in mid-December each year.  A potluck meal was shared by all, and after, a visit from Santa with gifts for all the children.   (Thank you, Kenny and Linda Rodenbeck, aka Santa and Mrs. Claus, for your years of dedication to this.)  Some years there would be entertainment, or games.  One year we even had a Gingerbread House Contest!

Statue of Our Lady of Guadalupe:  Donated by Marcella Birckhead in memory of her late husband, Roy.  It was placed outside the main Church Office door for several years, then was moved to the back hall by the Library. 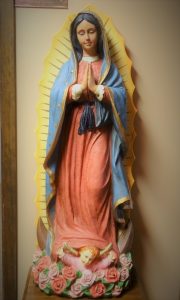 Sacred Heart Statue:  This beautiful statue was Robert and Allegra Peterson’s.  It was donated to the church by their children in memory of Bob and Allegra upon her passing in 2008.  It sat in the main Church Office for many years and was later moved to the Adoration Chapel. 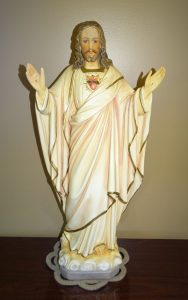 Christmas Eve Children’s Mass:  Due to the lack of parish children, Fr Tom got the adults involved! 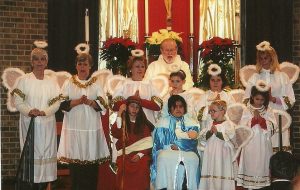 Mardi Gras:  Before Lent in 2009, Mardi Gras was celebrated with fun for all. 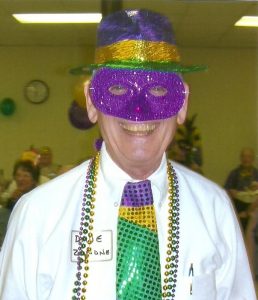 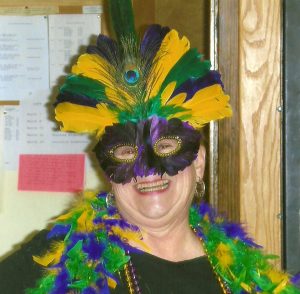 Downstairs Classrooms Enclosed:  in 2009 the downstairs classrooms, which were originally separated by accordion partitions (not very soundproof for Sunday CCD) were enclosed with permanent walls.  Due to the lack of storage at church, the center classroom was made a permanent storage room; janitorial and Bingo supplies are mostly stored in here.  The Bingo board, which was suspended from the ceiling with chains, has found a permanent home on the solid walls that were erected to enclose the classrooms.

Repair and Restoration Project – Phase I:  With the worry of mold in our ductwork, upper windows in the Sanctuary rotting, roof leaks and ceiling damage, brickwork needing to be re-tucked and waterproofed, we realized it was time for some serious renovations of the church building.  So began Phase I, cleaning out the duck work and installing UV lights to prohibit the growth of mold.  Phase I was paid for with the savings we had with the diocese.